Dr. Wang’s research interest is in exploring the cellular and molecular basis for tumor growth and metastasis using cell-based culture systems, syngeneic and xenograft mouse models as well as clinical specimens for the study of breast, ovarian, oral, lung and prostate cancers. Considerable emphasis has been placed on study of the interaction of tumor microenvironment or stroma with cancer cells in the regulation of progression and metastasis. Dr. Wang’s laboratory is also interested in investigating the role of cancer stem cells in metastasis, recurrence and drug resistance. The goal is not only to understand the mechanisms for carcinogenesis, but also to identify biomarkers useful for diagnosis, prognosis and development of intervening strategies and therapeutics.

For study of cancer cell invasion and metastasis, syngeneic pairs of low and high invasive lines were established for breast, ovarian and oral cancers using in vitro and in vivo selection. Genes and microRNAs array analyses of those low and high invasive lines allowed us to identify genes and miRNAs, as well as their underlying mechanisms involved in tumor growth and metastasis. For breast cancer, miRNA-149 has been identified as a metastasis suppressor via targeting GIT1, which is important for integrin signaling and cell migration. Low miRNA-149 and high GIT1 expression is associated with poor prognosis of breast cancer patients. Currently, we are focusing on identifying and investigating the molecules and their functions in tumor microenvironment important for lymph node and lung metastasis. For ovarian cancer, miRNA-138 was shown to inhibit cancer cell invasion and metastasis by targeting SOX4 and Hif1-alpha. Low expression of miRNA-138 and high expression of SOX4 is associated with late stages ovarian cancer. Moreover, glucocorticoids were found to transcriptionally induce the expression of miRNA-708 to suppress ovarian cancer invasion and metastasis via targeting Rap-1B to inhibit migration and invasion. Low expression of miRNA-708 correlates with poor prognosis of patient survival. Stem cell-like “cancer initiator cell lines” were established from fresh ovarian tumors and an established human ovarian cancer line SKOV3 and those lines were shown to display stem-like properties including increased expression of stemness markers, as well as enhanced tumorigenicity and drug resistance. The underlying molecular mechanisms are under investigation. For oral cancer, we have identified miRNA-491-5p as a metastasis suppressor also via targeting GIT1, of which the elevated expression is associated with poor patient survival.

For lung cancer, using a Balb/C syngeneic mouse model, lung and liver organ tropic metastatic lines were established from the parental L1 line by in vivo selection, and they are being used for studying the molecular mechanism for early colonization of tumor cells in lung during early phase of distant metastasis.

For prostate cancer, we have previously shown that the GTP exchange factor Vav3 plays an important role in bone metastasis of the PC3 cells, and have established bone metastases-derived lines. Currently, those lines are being studied for molecular basis for mediating PC3 cells metastasis focusing on alteration of glycolysis enzymes. 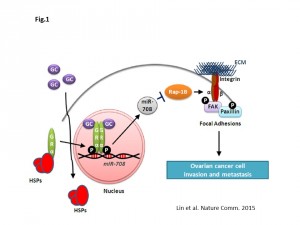 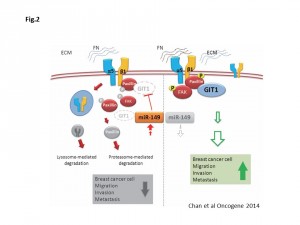