May 2013-Mar. 2014      Interim Director, Institute of Biotechnology and Pharmaceutical Research

Dr. Chang’s recently research is focus on regulation of HBV replication and hepatocyte differentiation by inflammatory cytokines and biological functions of HBV spliced RNAs. The pathogenesis of HBV-induced liver diseases involves complicated mechanisms revolving around viral replication and immune responses against HBV infection. Dr. Chang’s team has established a HBV-producing cell line capable of replicating virus efficiently. This provides a suitable model for investigating the regulation of HBV replication. They found that HBV replication can be effectively suppressed by TGF-β1 or IL-6, primarily through inhibition of viral transcription or assembly of viral capsids. The decreased level of HNF-4α was mediated through the antiviral effect of TGF-β1 and the activation of PI-3K signaling pathway was involved in the antiviral effect of IL-6. We also found that growth arrest can simultaneously induce cell differentiation and enhance HBV replication. These results indicate that HBV replication can be regulated by inflammation induced in CHB, which is mediated by cytokines and growth/differentiation status of hepatocytes. Further characterization of the molecular mechanisms and signal pathways involved in the regulation of HBV replication by TGF-β1 and IL-6, and differentiation status of hepatocytes is helpful to understand the overall regulation mechanism by which infected hepatocytes regulate the virus amplification and clearance. In addition, they will provide the framework for the design of drugs to control HBV replication during the progression of chronic hepatitis B virus infection (CHB).

Hepatitis B virus (HBV) has been classified into eight genotypes (A to H) based on divergence in genomic sequences. Several studies revealed a close association between HBV genotypes and disease progression. However, the mechanism involved in the clinical relevance of these genotypes is not well understood. Transcription of HBV genes primarily consists of four unspliced transcripts that encode viral proteins for HBV replication. In addition to unspliced RNAs, several spliced RNAs have been identified in HBV genome-transfected cells and infected liver tissues. The expression of spliced RNAs was demonstrated as relating to the viral life cycle and clinical outcomes of liver diseases. Dr. Chang’s team characterized and estimated the population of spliced RNAs in either HBV genotype D- or genotype A-transfected HepG2 cells by sequencing of random-packing colonies. They revealed that the species and frequency of spliced RNAs were dramatically different between these two genotypes. Multiple splicing events occurred more frequently in genotype A-transfected cells compared with that in genotype D. furthermore, the significance of these distinct populations of HBV spliced RNAs in viral replication and host-virus interactions during disease progression is worthy of further investigation.

For the past years, Dr. Chang’s team has been devoted to understanding the roles of the spliced viral RNAs on regulating HBV replication. Using cultured human hepatoma cells as a model of HBV infection, they found that the expression of 2.2DS-RNA caused a decrease in HBV replication. In cultured cells, the ectopic expression of 2.2DS-RNA obviously reduced the intracellular levels of HBV mRNAs. Their analysis of the 2.2DS-RNA-mediated suppression of viral RNA expression showed that 2.2DS-RNA inhibited transcription via binding to the TATA-binding protein and stress granule proteins. There findings suggest that the 2.2DS-RNA acts as a suppressive noncoding RNA that modulates HBV replication, which may in turn influence the development of chronic hepatitis B. These results will provide a framework for better understanding of the regulation of HBV replication and the biological functions of these spliced RNAs. Furthermore, this knowledge will provide insights into developing a novel therapeutic strategy for curing CHB patients.

Patients infected with certain genotypes of HBV have a lower risk of hepatocellular carcinoma and exhibit a more favorable response to antiviral therapy than patients infected with other HBV genotypes. Using cultured human hepatoma cells as a model of HBV infection, we found that the expression of 2.2DS-RNA caused a decrease in HBV replication. In cultured cells, the ectopic expression of 2.2DS-RNA obviously reduced the intracellular levels of HBV mRNAs. Our analysis of the 2.2DS-RNA-mediated suppression of viral RNA expression showed that 2.2DS-RNA inhibited transcription via binding to the TATA-binding protein and stress granule proteins. Our findings suggest that the 2.2DS-RNA acts as a suppressive noncoding RNA that modulates HBV replication, which may in turn influence the development of chronic hepatitis B. (J Virol. (2015)) 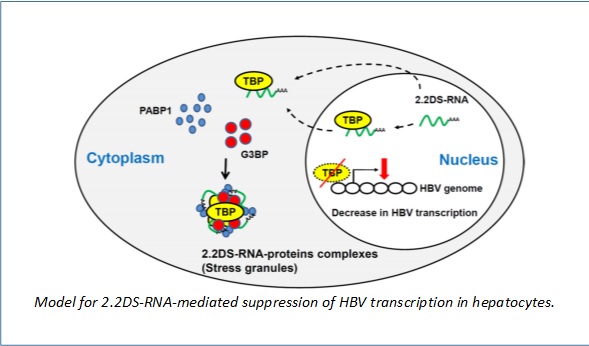 Hepatitis B virus reactivation is an important medical issue in cancer patients who undergo systemic chemotherapy. Up to half of CHB carriers receiving chemotherapy develop hepatitis and among these cases a notable proportion are associated with HBV reactivation. However, the molecular mechanism(s) through which various chemotherapeutic agents induce HBV reactivation is not yet fully understood. In this study, we investigated the role of the cell cycle regulator p21 (Waf1/Cip1) in the modulation of HBV replication when a common chemotherapeutic agent, doxorubicin, is present. We showed that p21 expression was increased by doxorubicin treatment. This elevation in p21 expression enhanced the expression of CCAAT/enhancer-binding protein α (C/EBPα); such an increase is likely to promote the binding of C/EBPα to the HBV promoter, which will contribute to the activation of HBV replication. Our current study thus reveals the mechanism underlying doxorubicin modulation of HBV replication and provides an increased understanding of HBV reactivation in CHB patients who are receiving systemic chemotherapy. (PLoS ONE (2015))

Hepatitis B virus (HBV) is the smallest DNA virus and the major cause of acute and chronic hepatitis. The 3.2 kb HBV viral genome generates four major species of unspliced viral transcript as well as several alternatively spliced RNAs. A 2.2 kb singly-spliced RNA is the most abundant spliced RNA and is widely expressed among all HBV genotypes. The expression of the singly-spliced RNA, as well as that of its encoded protein HBSP, is strongly associated with hepatopathology during HBV infection. Here, we report a novel inhibitory role of a p21.5 protein, which is encoded by a 2.2 kb singly-spliced RNA, in the modulation of HBV replication. We show that overexpression of the singly-spliced RNA is able to efficiently inhibit HBV replication. Furthermore, a mutation in the ATG start codon of the precore region completely abolishes the inhibitory effect of the singly-spliced RNA, indicating that a viral protein (p21.5) derived from the singly-spliced RNA is the mediator of the inhibition. Furthermore, p21.5 is able to form a homodimer that interacts with core dimers forming hybrid viral assembly components. Sucrose gradient fractionation revealed that co-expression of p21.5 resulted in a spread distribution pattern of core proteins ranging from low to high sucrose densities. When compared with p22, p21.5 is almost ten times more efficient at destabilizing HBV nucleocapsid assembly in Huh7 cells overexpressing either p21.5 or p22 protein. Moreover, in vivo expression of p21.5 protein by tail vein injection was found to decrease the amount of nucleocapsid in the livers of HBV-expressing BALB/c mice. In conclusion, our study reveals that the HBV 2.2 kb singly-spliced RNA encodes a 21.5 kDa viral protein that significantly interferes with the assembly of nucleocapsids during HBV nucleocapsid formation. These findings provide a possible strategy for elimination of HBV particles inside cells. (PLoS ONE (2015)) 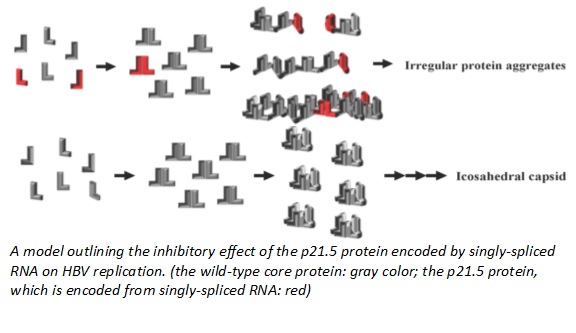 Dr. Chang has been very active in academic activities in Taiwan and Asia Pacific region. He was elected as the President of Chinese Immunologist Society (Taipei) and Chinese Cell Biology Society (Taipei). He is now serving as the Secretary General of APOCB (Asian-Pacific Cell Biology Society). Dr. Chang has authored more than 100 papers and hosted several international conference and symposia.